The domain of the project Examining communitas (Communitas na ispitu) is the performing arts, dance in particular, by means of which we are trying to understand our recent social history and its actual state of affairs in terms of body images, behaviour in public, and relations between human beings as social subjects. 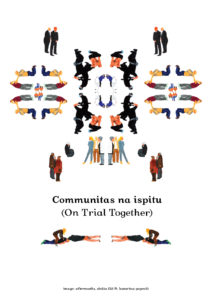 sinisa ilic, katarina popovic: on trial together – an illustration

The project is context-based, as these images of the body are informed by two main social contexts of the twentieth century, both of which we have lived in – Eastern socialism and Western neoliberal capitalism. We start with our life-experienced limbo between them.

Communism of the real socialist states collapsed, but the question of collectivism is still with us, as evidenced by Roberto Esposito’s explanation of the moment we now live in as “a situation that joins in a unique epochal knot the failure of all communisms with the misery of new individualism”. Therefore, our main concern in this project is how to rethink and reaffirm the collectivism today in a neoliberal capitalist society that promotes individualism, from economy and art, to everyday life. The current protests of the precarious urge us to think this issue within the real social circumstances in which it becomes a historical necessity, whether society and its ideology are prepared for it or not.

Some of our central questions are:

We challenge individualism as an ideological verification of personal interests and private property and as the perspective on the human being as independent atom, which we have never seen in reality. However, we don’t romanticise the collective as it was shaped in the socialist countries, since we are aware that those societies failed in taking care of singular human beings and their specificities as well as, in Jean-Luc Nancy’s words, in thinking being-in-common, which was replaced with an abstract and thus totalitarian common-being. So, without having a card up our sleeve, we conceive this open project, wanting to examine communitas and thereby to reflect on the possibilities of being-together in today’s society.

Within the research project we organize the performance On trial together. It is conceived as a hybrid public event between theatre play, choreography, social game, and happening. It takes place in a theatre venue, thereby reaffirming theatre’s capacity to symbolize the social. But here, the stage is reappropriated and becomes a place in public space where citizens discuss issues important to their society and speculate about its future through fictional constructions. The fundamental principle is that human beings never experience reality directly but through symbols, discourses, and socially constructed narratives. 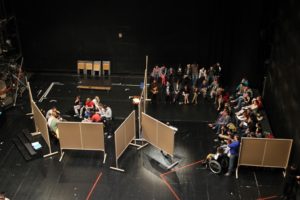 The playing of the performance is predicated on social, live action, and role-playing games and simulations, open for audience to take part in. Thus, all audience members, with the help of five moderators are performers. Content-wise, the departure point lies with a few fictional situations that refer to burning socio-political issues in a certain context. They are drafted in advance and left to the players to develop and transform them through the process of playing, at the same time narrating the stories of a possible social organisation and relations. 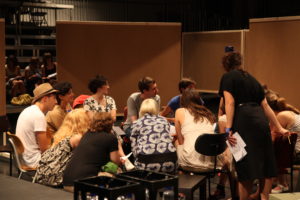 on trial together: episode berlin (2012) 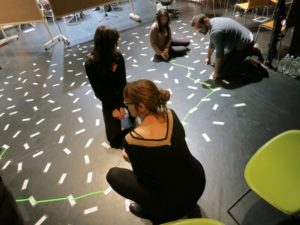 Up and Down, Then Up and Again Down of the Workers’ Self-Management examines class solidarity, starting with the case of Jugoremedija, the last factory self-managed by workers in today capitalist Serbia. It employs Live action role-playing (LARP) game, wherein the participants physically (by speech and action) act out their characters, collaborating with the others or acting against them.

The Others is inspired by R.W. Fassbinder’s play Katzelmacher, and its playing is based on the BaFa BaFa simulation. The participants split into two groups construct certain socio-cultural identities, and at the same time, through observing and interacting with one another, try to understand and interpret the other group.

Collective Intelligence Test is a reenactment of a political speech well known in a certain context, which is followed by discussion. It relies on the icebreaker team-building game, Just the Facts!, adopting its premise of using only the facts about what was performed, thereby challenging ‘public opinion’ about a social matter. 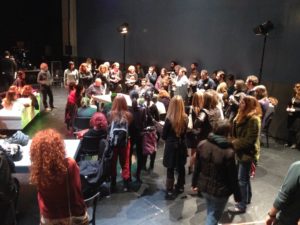 on trial together: episode athens (2014) 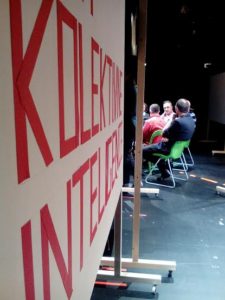 on trial together: episode ljubljana (2015)

Structured in this way, On Trial Together is an investigation of different registers in which a community exists: the social context to which all individuals belong, social groups based on cultural identities, and social relationships predicated on collectivism and solidarity. Therefore, the performance functions as a kind of deep play: a theatrical story we tell ourselves about ourselves, and a choreographic spectacle we create for no one’s eyes.

The story and its social choreography are temporary, changeable, and – we insist – they largely depend on us. Thus, each performance is a unique event that starts off with the situation created in the course of the previous event in the chain, thus constructing an open series whose results and conclusions no one can predict.

[1] The term is borrowed both from Victor Turner and Roberto Esposito, in order to question and to hack the social community as it is today. We understand communitas as a proto-community, where social structure is still not defined, therefore either opening possibility for solidarity of the equals or reminding us on the impossibility to immunize ourselves when surrounded by others.

← Vita performactiva(In) the Person of the Author →