Ana Vujanovic and Bojana Cvejic, Toward a Transindividual Self: A study in social dramaturgy, Oslo – Brussels – Zagreb: Oslo National Academy of the Arts – SARMA – Multimedijalni institut, 2022 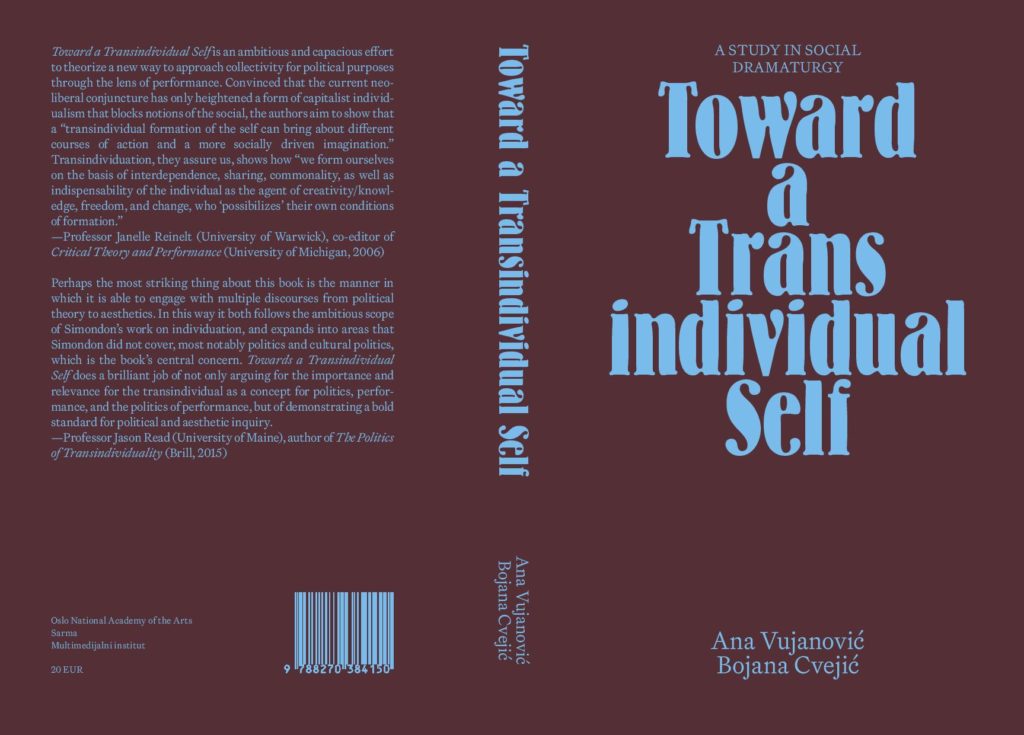 Toward a Transindividual Self examines the process of performing the self, distinctive for the formation of the self in Western neoliberal societies in the 21st century. It approaches the self from a transdisciplinary angle where political and cultural anthropology, performance studies, and dramaturgy intersect.

Starting from our concern with the crisis of the social, which coincides with the rise of individualism, Bojana and I critically untangle individualist modes of performing the self, such as possessive, aesthetic, and autopoietic individualisms. However, our critique does not make for an argument for collectivism as a socially more viable alternative to individualism. Instead, it confronts us with the more fundamental problem of ontogenesis: how is that which distinguishes me as an individual formed in the first place? This question marks a turning point in our study, where it steps back into the process of individuation, prior to, and in excess of, the individual.

The process of individuation, however, encompasses biological, social, and technological conditions of becoming whose real potential is transindividual, or more specifically, social transformation. A ‘theater of individuation’ (Gilbert Simondon) captures the dramaturgical stroke by which we investigate social relations (like solidarity and de-alienation) in which the self actualizes its transindividual dimension. This epistemic intervention into ontogenesis allows us to expand the horizon of transindividuation in an array of tangible social, aesthetic, and political acts and practices. As with every horizon, the transindividual may not be closely at hand; however, it is certainly within reach, and the book encourages the reader to approach it.

For more information look inside!

A review of the book State of Insecurity: Government of the Precarious by Isabell Lorey, published by Verso in 2015.

The political theorist Isabell Lorey is one of the most striking European voices in the recent debate on precarity and precarization – terms that describe the systematic inequalities wrought by neoliberalism in the name of financial crisis and austerity, and which lead to such recent phenomena as militarized violence and xenophobia. For reference, Lorey draws from political and biopolitical theory, feminism, gender and postcolonial studies, as well as the interventions made by social and political movements, such as Euromayday, Occupy, and 15-M. This invigorating intersectionalism has created a potent critical platform for analyzing the present moment.

State of Insecurity: Government of the Precarious is Aileen Derieg’s translation of Lorey’s book Die Regierung der Prekären (2012). It is her first book to appear in English, though she is the author of numerous works of cultural and political theory in German. Here Lorey is particularly concerned with the neoliberal “state of insecurity” and how it relates to the process of precarization. Lorey’s long-term research on precarity leads her to the question of neoliberal government, of government through and by insecurity. The first line of the book makes this clear: “If we fail to understand precarization, then we understand neither the politics nor the economy of the present” (1).